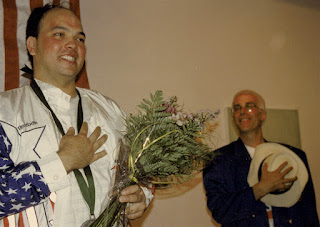 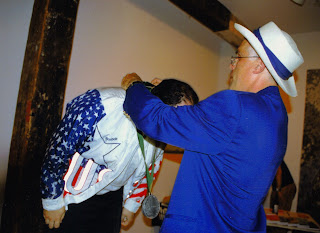 This is great that you are doing this and just yesterday I was looking at photos of Matt still grieving our loss. He was such a positive person in my life. I feel I have lost a limb. His memory continues...

Below I have clipped notes on a performance we did that I posted to my instagram page of past work (@gnitcelfer.reflecting). I can tell you more if you want to know what really happened but the official version is below including explicatory text from Sina Najafi, the editor of Cabinet magazine who sponsored the event. You can reach out to him if you want more detail, too. These are the only two photos that exist as far as I know, but it was a packed event with hundreds of people. You can tell from our red faces.

Finally, I think very few people knew he was a rower at Harvard. Besides my being his student and a practicing artist in Williamsburg from 1999-2006, that was our added connection. When I started coaching again at Columbia, I took him to practice on the Harlem river, and we made it from from the West inlet of the Harlem River to the East side where we could see a panorama of the whole island of Manhattan. He was like a little kid in wonder but sadly no photos that I know of.

Good luck with this, and if you need anything else please do not hesitate to reach out.

John
@gnitcelfer.reflecting
Award Ceremony, 2002A performance with Matt Freedman at Pierogi in Williamsburg, Brooklyn, NYC. He awarded me Cabinet’s then newest unlimited edition, Olympic Consolation Medal (which sounds like you can still get it!) More details were found in Cabinet Magazine's 'Failure' issue number 7, a beautiful edition that comes complete with failed trimming - just slightly not square. Forever I keep pushing it in my bookcase to make it line up with the other books.

Oh wow; a blast from the past. This picture from the 2002 Cabinet "Failure" issue launch event shows artist Matt Freedman bestowing a belated Olympics medal to John Parker, who was on the US Olympics rowing team that came in 4th at the 1992 Barcelona Olympics. Legend has it that the so-called "tout de même" participation medal was devised by the egalitarian folks on the 1976 Montreal Olympics Committee so as to make athletes who don't come in the top three feel valued, but all the medals were destroyed at the last minute when the International Olympic Committee heard about the Canadians' soft-hearted scheme and flew off the handle. Again according to legend, one medal escaped being molten down, which is why Cabinet could make casts of it for deserving athletes like John Parker.
#mattfreedman
===============================